I grew up in Minneapolis, Minnesota. You can get pretty much anywhere in the city, and a lot of the state using dedicated (off-street) bike trails: 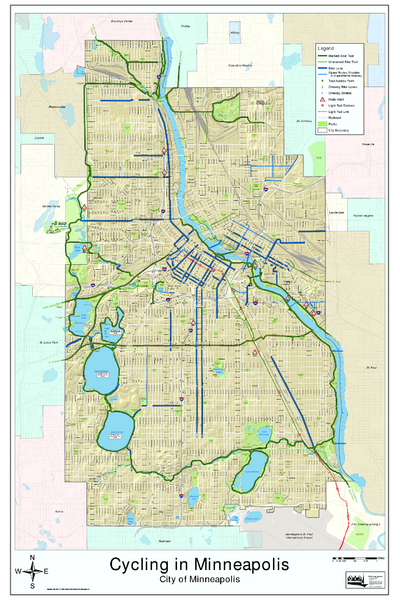 If there were no significant winter snowfall or icing issues, I’m pretty sure it’d be known as one of the most bike-able cities in the US. Nevertheless, the main problem with getting more people biking is that:

So, long story short, it’s an urban planning issue, and solutions that don’t focus on changing the minds of the planners will ultimately fail. Plan to make cars more expensive and more hassle to use than bikes and/or public transit, and people will use the latter. But, almost no one is looking into planning this way at the city/county level, because residents are a poor way to grow the tax base, compared to luring in a Costco, which only makes sense for people with lots of cargo space to visit in the first place.

Perhaps the one alternative that might work would be to increase the cost of having a driver’s license. Say, to somewhere on the order of $1K/year. That, and/or a much stricter German-style driver’s test, would make automobile ownership and usage much less “automatic”, and also inadvertently force communities to make sure they could cover all basic shopping needs locally (though I’m sure entrepreneurs could, with mild incentives, largely take care of that angle). But that would be as deep a challenge to the American concept of personal freedoms, that it’s right up there with gun control as far as how easy it would be to do.

The best bet? Wait for the oil to run out. That’ll dramatically increase bicycle usage world-wide more than any other factor.

How can we get more people to use a bicycle?

One thought on “Deano’s answer to: “How can we get more people to use a bicycle?””