After much researching online, and despite counter-evidence in the form of IMDb listing, it seems that the motion capture for The Destroyer was done by Joseph Gatt: 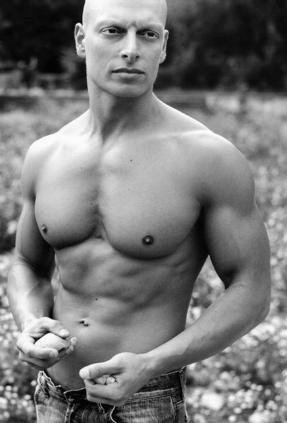 Though Gatt’s IMDb entry for Thor (2011 movie) listed him as Frost Giant Grundroth several weeks before the release, in several interviews Gatt gave before the movie’s release, he made it clear that his role was “top secret”, and that all he could say was the following:

The last three items make it much clearer – the only ‘Asgardian warrior’ (Frost Giants are… uh… Juntenheimers?) who gives Thor trouble, who also has scenes with Loki… Well, he’s either Odin or the Destroyer. And last I checked, the guy in the photo above doesn’t look nearly cut enough to be Anthony Hopkins, so…

As far as the “beefcake factor” with female viewers… I think the prospect of a crazily-morphable unstoppable sexy robot eunuch is a fantasy that spans gender identity, so in that sense, no, it’s probably not aimed at the ladies (exclusively).

Finally, none of the data at IMDb, Gatt’s website josephgatt.com, or Wikipedia reveals the specific sexy-quotient of Mr. Gatt’s stride for comparison. Intrepid researchers are undaunted, however, and are looking for copies of the God of War video game series for possible corroboration.

This answer originally appeared on Quora: In Thor, why does the Destroyer walk in such a hip-swiveling sexy manner?