Theoretically? Impossible! In reality? Not all that hard. 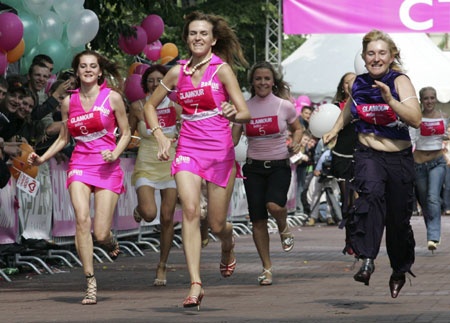 The image above depicts the Glamour Magazine-sponsored "High Heels Race", an annual event in Moscow Russia that is also spreading to other countries like Finland and the Netherlands.

The photos still look pretty awkward, perhaps, so you might want to check out the video of one of the events: http://www.youtube.com/watch?v=f…

They're running pretty darn flat-out, with a minimum requirement of 3.5" heels on[*].

Quorra's heels don't look quite that high – and being wedges, they are probably much less fragile/dangerous than stilettos.

Thus, I would say that there's plenty of evidence that, with practice, Olivia Wilde could run quite easily in high heels – though the boots from her Tron: Legacy costume would be more challenging than regular daily-wear fashion stilts.

As Eunji Choi points out in her answer, if you're considering an actual run in the "real world", stilettos are probably your best bet all around, with stiletto boots leading the pack… One caveat – Quorra's wedge-style heels are going to have much greater potential ground-touch surface area, which will mean easier stopping once you're a skilled heel-runner. Also, the more heel there is on the boot, the harder it will be to accidentally break off (and when you do, broken boots will be the least of your problems).

How difficult would it be for Olivia Wilde (the actress who plays Quorra) to run around in her high heel boots?

One thought on “Deano’s answer to: “In TRON: Legacy, how difficult would it be for Olivia Wilde (the actress who plays Quorra) to run around in her high heel boots?””