As someone who answers a fair number of questions with more questions, I'd surprisingly say it would be a vastly different experience:

Jeopardy! is not really about responding with actual questions, but rather 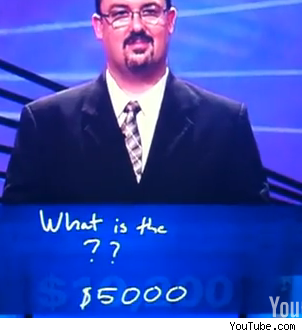 This arrangement does not provide for nearly the same the breadth and depth of questions and answers that already exist on-site, and the requirement for a "correct" answer would also dramatically reduce the total addressable user market for the service – when opinions (or for that matter, things like humor) are completely sucked dry from answers, then only highly-educated obsessives would spend much time even trying to participate – as bad answers or even ill-phrased ones would be chastised at a level much higher than exists today – and even the existing "lower" bar turns many people off, if you search for discussions about Quora online.

On the pro side, it is possible that given the rush to enter the single correct answer, some members would gain additional skills in typing, proper question phrasation, or lateral thinking/multitasking. Still, they would be the minority, and probably would treat each other in a far more hostile/competitive manner than the real world "Quora Elites" seem to behave.

So, long story short: it would be a lot more boring, with a lot fewer regular users/community members. I love Jeopardy!, but the unique construction of this gameshow is not something that readily translates to the specific dynamic that makes Quora successful.

What would it be like if Quora met Jeopardy and you had to respond with a question?

One thought on “Deano’s answer to: “What would it be like if Quora met Jeopardy and you had to respond with a question?””