I'm trying to imagine what I would be afraid of showing a 7 year-old from Wheels on Meals, and I'm coming up blank. None of Jackie's movies are better in terms of single-take stunt/fighting shots. In fact, according to Wikipedia:

Wheels on Meals was the first of two films which paired star Jackie Chan against former professional kickboxing champion Benny Urquidez (the other being the 1988 film Dragons Forever). Their fight in this film is typically regarded as one of the greatest on-screen martial arts fights ever performed. At one point in the final battle between the pair, a spin-kick performed by Urquidez is so quick that the resulting airflow extinguishes a row of candles. This is shown onscreen, with no cuts or trick photography. 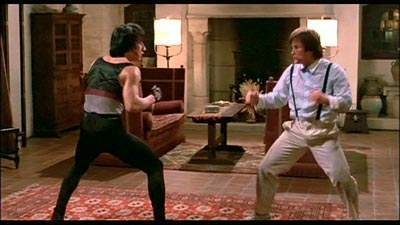 More information on the movie (including the wacky titling) here: