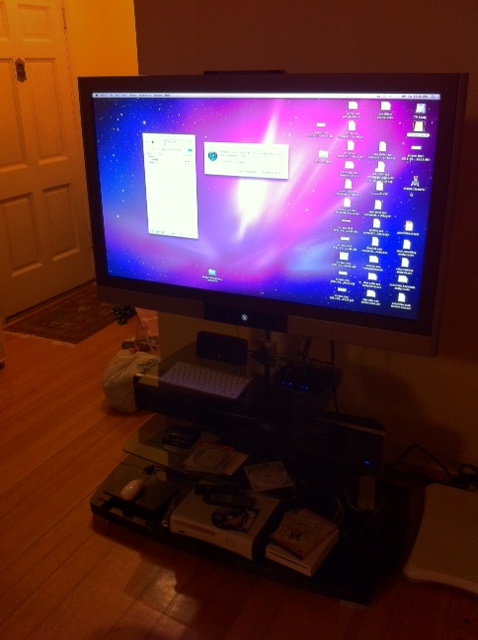 In all seriousness, it’s totally possible to set up your computer with just about any kind of TV these days… If it has HDMI, it’s a no-brainer (though, in truth, nothing beats DVI to DVI when you can get it, or HDMI-HDMI failing that).

As others have mentioned, it’s a pretty clear-cut issue of image quality and resolution – expensive computer monitors push a LOT more pixels, with MUCH better overall color/black quality than almost any TV/video monitor out there.

The easiest way to think of it is this: no matter how big the TV set, it’s an 18″ widescreen computer monitor running 1920×1080 resolution, tops. Bigger size means bigger pixels… And a lot of the time, that means a computer image that looks a little “hazy” or downright blurry.

This will not always be the case – Digital film and TV production is no operating at much higher resolutions, and 2K/3K/5K resolution tv sets are anywhere from technical prototypes to production stage already. The only problem is, when you start pricing those sets, they start looking like… well… computer monitors.

Long story short, a television is not a replacement for a computer monitor, but a large enough computer monitor could easily replace a (smaller) television set. In either case, though, you’re bound to sacrifice some of the featureset of a single-purpose device in order to get the cost/space savings of a dual-role unit.

Can I use a LED TV as my Apple computer display if it has an HDMI port?