I see restaurants doing this now. It makes the water disgusting. Why??

Deano says: Believe it or not, there are people who disagree with you on the taste. 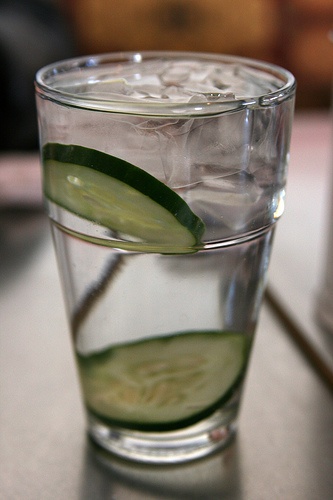 (Me? I love it! Photo courtesy of http://www.flickr.com/photos/qui…)

But, similarly to how various types of soda flavors have their supporters and detractors, the various "flavor infusing" garnishes taste good to some, and terrible to others.

Cucumber water is especially interesting, because of the phrase "as cool as a cucumber"… This phrase isn't just an idiom, but a scientific fact: due to the structure and composition of the external skin of a cuke, along with its high internal water content, the inside of a cucumber remains quite cool even during the summer months (the natural harvest of cucumbers typically runs May to July)… This led to not only the idiomatic phrase, but also the inclusion of cucumbers in all manner of summertime dishes, to help achieve that "flavor association" with cool/cold when it is most needed by us easily-psychologically-tricked humans. 😉

Because of the high internal water content, sliced cukes will readily pass on their flavor into a normal water vessel quite rapidly. This flavor, in turn, tastes "cool" to those with a taste for it, and in our increasingly-HFCS[*]-addicted society, having a flavorful alternative to Mountain Dew and Starbucks 4-pump Venti Green Iced Tea – especially one so cheap and easily made – can be a great way to convince people to drink more water.

Drink more water, be less hungry, less tired, have better skin… There are a bunch of good outcomes for adding natural flavoring (especially zero-calorie flavoring) to water… If you don't appreciate cucumber water by itself, you might try a cucumber mint or cucumber lemon combination… For added effect, try drinking it while taking a sauna/steam/jacuzzi. Best when a contrasting rivulet of hot salty sweat runs down over your lips right before taking a sip. Yuuuuuuum!

And if all that doesn't work, well, then cucumber water isn't for you. So what? Not the end of the world… Just use lemon, lime, mint, or good ol' plain water, to the tune of around a gallon a day, and reap the benefits of the laziest form of fitness there is: proper hydration.

What's the deal with putting cucumber slices in water?